This English-language text was created by the Japan Tourism Agency.

Grassroots Preservation for an Industry in Decline

The Mosaic Tile Museum is located in the town of Kasahara, an area famous for tile production. During its heyday in the mid-1900s, Kasahara had over 100 tile factories and supplied the majority of the domestic market.

The history of ceramics production in Kasahara stretches back some 1,300 years, but it was only in the twentieth century that ceramicists in Kasahara began to focus on making tiles. Following World War II, the reconstruction efforts created a demand for tiles, and the town’s economy boomed. This was followed by a second golden age in the late 1980s and early 1990s, when exterior tiles were used in the construction of high-rise buildings. However, as the twenty-first century approached, the industry was hit hard by a combination of changing lifestyles, the emergence of new building materials, and competition from overseas producers.

Around the turn of the century, many twentieth-century mosaic tile installations were at risk of being destroyed as the aging structures they occupied were scheduled for demolition. Under the direction of the Kasahara Chamber of Commerce, individuals in Kasahara began acquiring or salvaging the mosaic works. Discussion began about where to house and display these distinctive artifacts. Despite being competitors, several local tile, trade, and clay companies came together to support the project. The Mosaic Tile Museum is the result of this collaboration. The museum not only preserves the physical tileworks themselves but also helps to support the tile industry. Tile-making workshops are held at the museum, and its second floor has sixteen showrooms that showcase the decorative possibilities of tile. 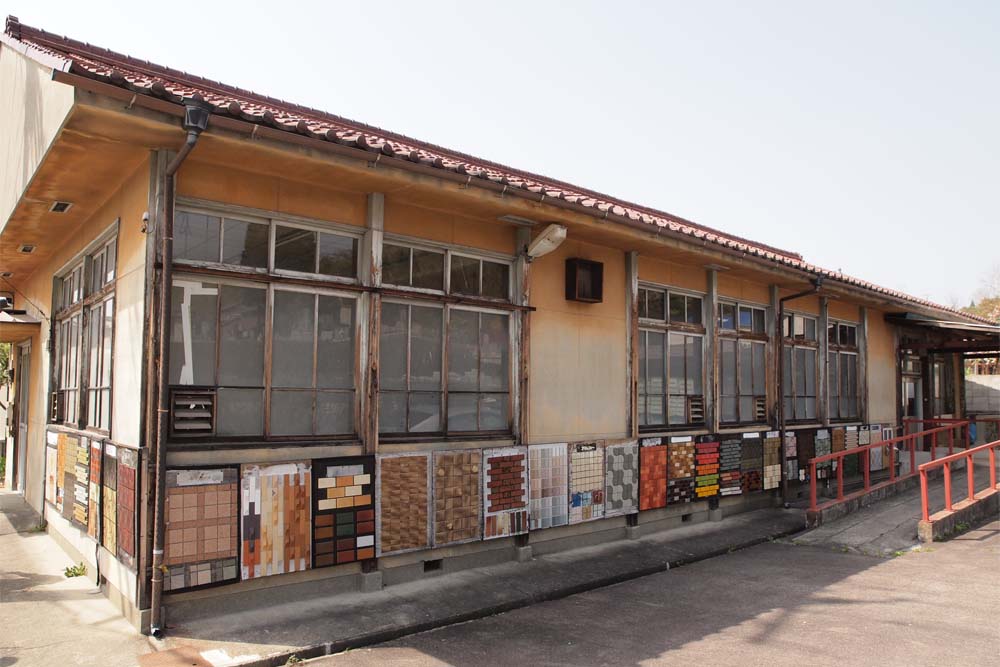 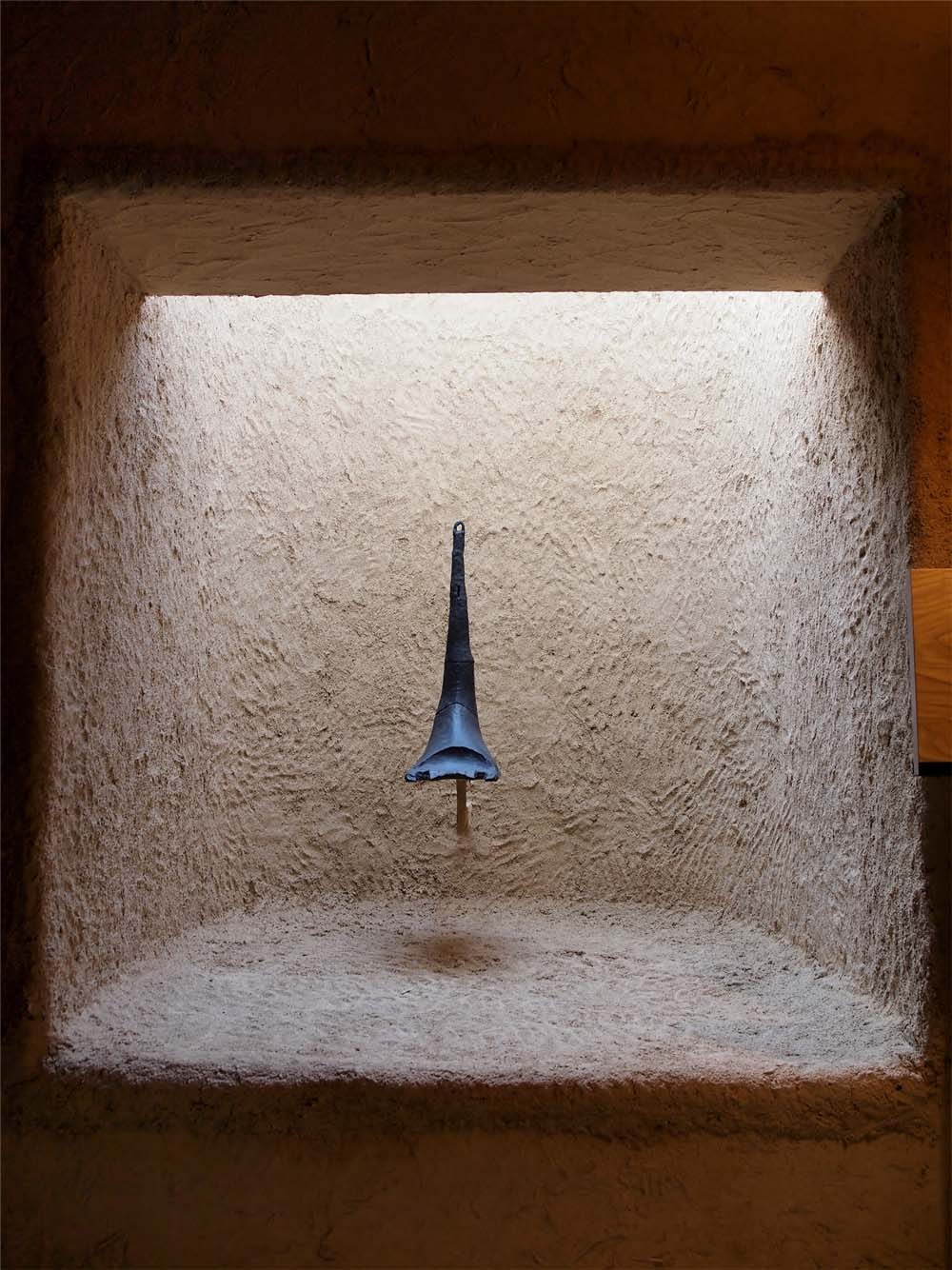 The museum’s design is the work of celebrated architect Fujimori Terunobu, who drew inspiration from Tajimi’s tile industry and the earth that sustains it. The building’s atypical sloping shape resembles the face of a clay quarry, and there are pine trees growing along the outer contour of the roof and earthen walls. Shards of tea bowls and tiles donated by local residents are embedded in the building’s earth-colored façade.

An alcove near the museum’s entryway displays a single piece of artwork: a contemporary ceramic piece by local artist Itō Keiji titled Soku, or “foot.” A similar piece by Itō inspired Fujimori’s concept for the museum building. In viewing the piece, Itō said he imagined a foot descending from the heavens, leaving a depression in the earth like the clay quarries that dot Tajimi. The alcove is illuminated by natural light flowing down from a shaft in the roof. The shadow cast by the artwork represents Fujimori’s imagined footprint.

A two-story staircase leads from the alcove to the main exhibition rooms. The walls alongside the staircase are plastered with earth, and the staircase itself is dimly lit, evoking the gentle rise of a noborigama climbing kiln. The passage gradually narrows to create a forced sense of perspective, then ends in an explosion of light from the oculus on the fourth floor. The overall effect is of traveling through a long underground tunnel and emerging into the bright world of mosaic tile.

The walls and floor of this partially open-air exhibit are covered in many thousands of small, circular white tiles. The exhibit showcases the practical and artistic possibilities of tile, which, like the tiles themselves, are almost innumerable.

Many of the items on display were originally in residences and commercial buildings. Including these everyday objects in the exhibit highlights the functional role that tile has played in Japanese life. Visitors are invited to reexamine common objects like toilets, signs, and sink basins and learn to see the beauty of their forms and craftmanship separately from their functions.

The collection also includes several examples of colorfully painted picture tiles salvaged from sentō bathhouses. These pieces not only reflect the obvious connection between tiles and bathing culture but also provide insight into Japanese cultural values, aesthetics, and modes of thought over the past century: the painted tiles depict inspiring historical scenes, classic landscapes, and auspicious cultural motifs.

Several large-scale artworks were created for this exhibit, including a tile-strung wire spiderweb that hangs from the oculus and a towering cone of bamboo-shaped stoneware tiles. The arrangement of the eye-catching cone depicts the evolution of tile-making techniques, from the hand-cast tiles at its base to the machine-made, spray-glazed tiles at its top. On the opposite wall is a mosaic mural of the Kasahara neighborhood by actor Harada Daijirō (1944–), who created it for Kasahara’s first autumn festival in 1999. 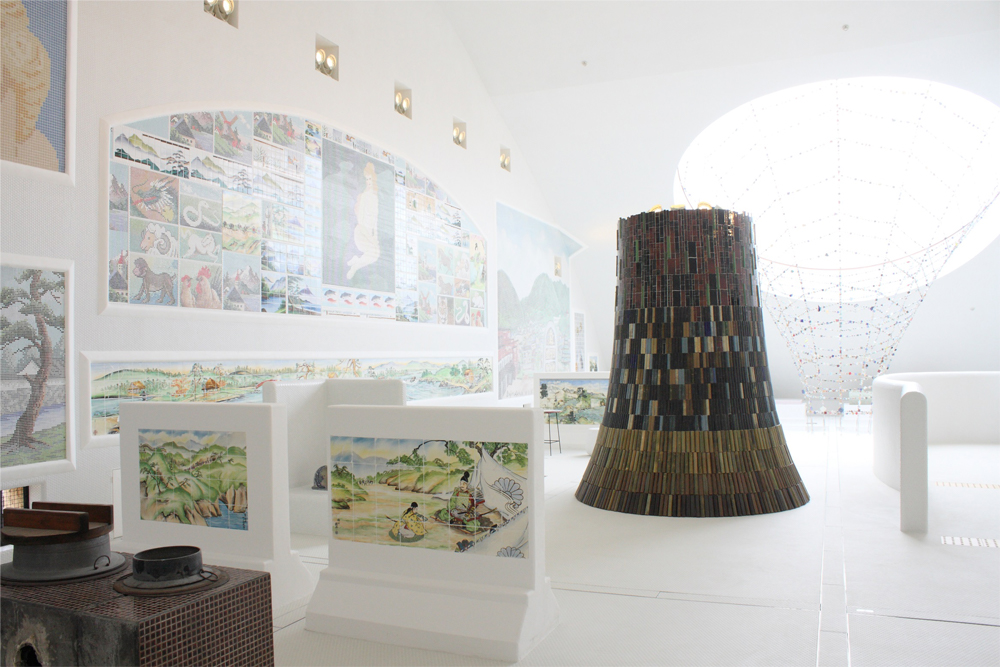 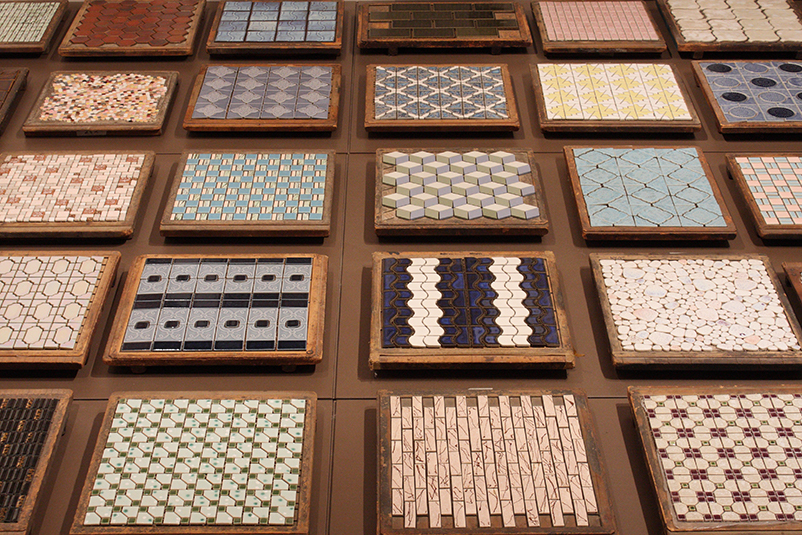 This exhibit covers the history of tile-making in and around Tajimi, including the evolution of both tile manufacturing and methods of tile application. Occasionally, temporary exhibitions are held in a separate gallery annex across from the permanent exhibit.

The permanent exhibit traces the development of the tile industry and its connections to local geography and pottery-making traditions, spanning the period from the introduction of ceramic building materials in the sixth century all the way to the modern day. Yamauchi Itsuzō (1908–1992) was a key figure in this development. Yamauchi was a driving force in the industrialization of local ceramics and is considered the inventor of glazed porcelain mosaic tiles in Japan. At a time when many ceramicists guarded their methods, Yamauchi openly shared his techniques in order to promote a shift from large, ornately decorated tiles to small, single-color tiles that were easier to make in large quantities. Smaller tiles also have a wider range of applications and are easier to apply to irregularly shaped items, such as the bathtubs displayed on the third and fourth floors. Industrially produced tiles are simpler in design and uniform in shape, but they can be assembled in diverse colors to create elaborate mosaics.

The exhibit also contains a variety of tools and equipment used in tile manufacturing, including an antique hand press, an early glaze-sprayer made from repurposed agricultural equipment, and a large collection of the hari-ban mounting boards that tilemakers use to assemble complex tile patterns before applying them.